Gurgaon: Pictures of cars in bonnet-deep water on Golf Course Road had flooded the Internet during the monsoon last year. Rainwater had gushed into one of its seven underpasses and the city’s central boulevard — a totem of both its achievements and ambitions — was subsumed by its chornic drainage problem.

This year, Golf Course Road was the silver lining in the flooding that followed Monday’s rainfall in most other parts of the city. The road ans its underpasses were not affected by monsoon’s first heavy rainfall, an early indication that a move by GMDA and IAMGurgaon, an NGO, to build four drainage channels to divert water flowing from the Aravalis into natural creeks had been successful. Experts, however, said they would wait to see if the plan would stand up to heavy rain.

The four drainage channels have been built in sectors 26, 42, 54 and 56. The water from these drains flow into the natural creeks, which have been widened and made deeper to hold more water. Since these creeks are at a higher elevation, they absorbed much of the rainwater on Monday and stopped it from flowing into Golf Course Road. This also reduced pressure on the Badshahpur drain.

“The move has reduced stormwater runoff by almost 50%. In Gurgaon, flooding never occurred only because of the runoff from the Aravalis. We had to identify the bottlenecks in the natural creeks, make them wider and deeper so that they could hold more water. This took pressure off the Badshahpur drain, which gets flooded during the monsoon and inundates the nearby areas,”said Subhas Yadav, nodal officer (environment and sustainability wing) at GMDA.

Several native species, such as Pilkhan, Goolar, Neem, Baheda and Arjun, have also been planted around these creeks so that the soil doesn’t become loose and the embankments don’t give away.

The brain behind the move is a team of researchers from the Teri School of Advanced Studies. After last year’s flooding, GMDA had commissioned the Teri school a three-month study to find out the reasons and ways to stop water flowing from the higher reaches into Golf Course Road.

“We carried out a survey between September and December last year and shared our findings and recommendations with the GMDA. They acted upon them immediately and the result is there for you to see this monsoon. However, our study was restricted to Golf Course Road,” said Fawzia Tarannum, assistant professor at the department of regional water studies at the TERI school.

Latika Thukral of IAMGurgaon explained why the decision to make the creeks deeper would work this monsoon. “The Gurgaon-Faridabad highway and MG Road are 200 metres above Golf Course Road. So, rainwater would invariably gush into Golf Course Road. Now that the creeks have been made wider and deeper, they have a good capacity to carry the stormwater. The sand and silt at the bed of these creeks would also allow seepage,” she added.

Environmentalists, however, said they would adopt a wait and watch policy to see if the plan holds its ground during heavy rain. “GMDA should get experts to review the plan. They should plant long grass along the creeks so that the soil doesn’t become loose and water seeps into it. We are not sure if the plan will work in case of heavy rain. Let’s see,” said Vaishali Rana Chandra, an environmentalist. Residents, meanwhile, heaved a sigh of relief to see Golf Course Road unaffected by Monday’s rain. “This is a nice initiative by GMDA. Their plan has saved our area from getting flooded this time,” said Rahul Chandola, a resident of DLF 1.

Engineering graduates seldom have aspirations of their own The Statesman (Campus & Career, Koltata Edition), 06-July-2021 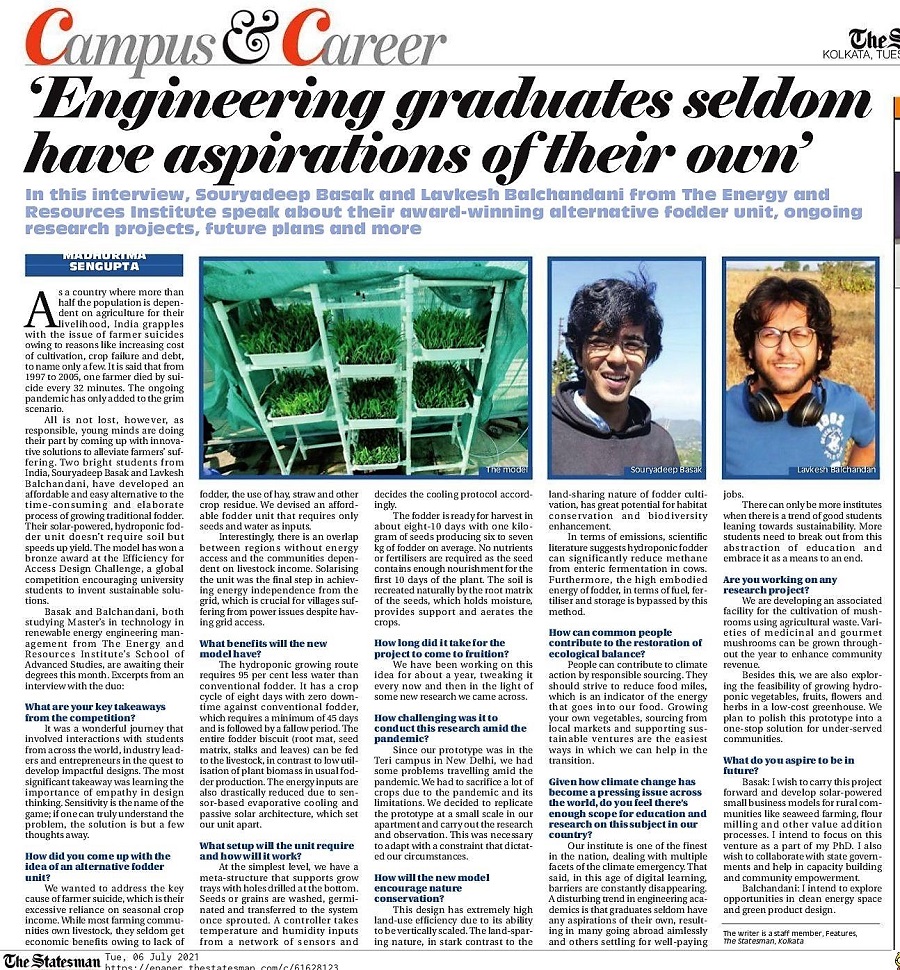 KOLKATA: Souryadeep Basak from Kolkata and Lavkesh Balchandani from Indore,classmates at Teri School of Advanced Studies, have won a bronze in the grand final of the Efficiency for Access Design Challenge, a prestigious global, multi-disciplinary competition that empowers teams of university students to help accelerate clean energy access.

The duo, who became engineers in 2018 and are currently pursuing Masters in Renewable Energy Engineering & Management, have designed a community level solar-powered hydroponic fodder unit for rural areas. The model developed by Basak and Balchandani essentially uses soil-less technology to accelerate cultivation of green fodder. “A combination of passive solar cultivation, evaporative cooling and hydroponics (agriculture using water and nutrients) to grow 6-8kg of green fodder from 1kg seeds. This will lead to the improvement of the rural economy by reducing dependence on agriculture,” Basak said.

It was news of farmer suicides that prompted them to take up the project. “Since farmers are dependent on agricultural income that depends on increasingly erratic weather patterns, they suffer losses. Our model aims to build resilience in the rural economy by diversifying their income,” explained Balchandani.

What the two classmates intended to do was feed the green fodder grown using hydroponics instead of agricultural waste to improve their nourishment and increase milk productivity that can then be sold. To supplement income further, they propose use of the agri-waste to cultivate mushrooms that can be dried and stored for sale and production of exotic vegetables and herbs, fruits and flowers in greenhouses. Basak and Balchandani have set up a prototype at Teri (The Energy and Resources Institute) SAS. After completing the Masters, Basak intends to do a PhD on the project and set up a pilot study in a village near Canning that is among the places most vulnerable to climate change.

“I want to do the study in a village with 200 cows, of which 100 will be given the green fodder diet and the rest continue on the agri-waste feed. This will help find out how much milk production improves. The aim is to start community level development with preference to widows of farmers who have committed suicide due to agriculture distress,” explained Basak.

Dr Raghunath Anant Mashelkar, Recipient of Padma Vibhushan in 2014 and Former Director-General, Council of Scientific and Industrial Research (CSIR) was the Chief Guest for the occasion.

Dr Mashelkar is known for his contributions to India's National Chemical Laboratory and Council of Scientific & Industrial Research, chairing multiple high-powered committees appointed by the Government of India on diverse issues, and a successful campaign against foreign patents on Indian traditional knowledge.

Due to COVID-19 pandemic and the protocols implemented by the government, this year's Convocation ceremony was held online including an FB live.

In this year's Convocation ceremony, a total of 18 PhDs and 216 Master's degrees were awarded to the students.

On the occasion, the Chief Guest, Dr Mashelkar said, "It is a great honour and a privilege to deliver the 13th Convocation of TERI School of Advanced Studies (TERI SAS). Its mother institution The Energy Research Institute (TERI), had distinguished itself globally through its pathbreaking contributions. I am delighted to see that TERI SAS itself is creating its own distinctive imprint in the area of sustainable development."

Dr Shailesh Nayak, Chancellor, TERI SAS also expressed his view on the occasion and said, "TERI SAS has been a unique institute for building capacity to address issues related to sustainability and balancing agenda of protection of environment and inclusive development, and building a new kind of leadership. A structured process of learning of inclusive education as advocated by TERI SAS, is an essential requirement of creating a sustainable society. The New Education Policy of India has recognised this fact and provided impetus to address sustainability as a part of education."

Prof Manipadma Datta, Vice-Chancellor, TERI SAS also congratulated the outgoing students and said, "We at TERI SAS are proudly striving to reach this goal! This august institution was established with this holistic vision only! If we are no good students, we can't become good teachers! Real learning is never domain specific! That's why we have been championing the cause of interdisciplinarity since the beginning and happy to find that the New Education Policy document to a great extent reflects the core, we are nurturing all these days! Our vision gets honourably vindicated! We can echo Benjamin Disraeli with confidence: A University should be a place of Light, of Liberty, and of Learning! Tamoso Maa Jyotirgamaya! We can strongly hope, our education system will continue to transcend to a more holistic learning system!"

TERI SAS (earlier TERI University) is one of the eminent institutes in the country in the field of Sustainability Education. It was conceived to disseminate the knowledgebase created by The Energy and Resources Institute (TERI). In 1999, the Institute was granted the 'Deemed to be University' status by the University Grants Commission (UGC) and notified vide the Ministry of Human Resources Development.

TERI SAS is deemed to be a university under Section 3 of the UGC Act, Government of India, committed to "Knowledge for Sustainable Development".

It offers 14 masters programmes and an interdisciplinary PhD programme in seven thematic areas in its campus in Vasant Kunj, New Delhi. It has awarded more than 130 PhDs and more than 2300 Master's degrees so far.