Welcome to the Site
Infrastructure

The layout of TERI SAS building A truly green campus, it puts into practice the very principles it teaches in its classrooms. An architectural delight, the campus has been planned to provide a setting that enhances learning, while simultaneously showcasing the concept of modern green buildings.

The campus is aesthetically designed with several features of passive solar design, energy-efficiency and water and waste management systems. The planning and orientation of spaces and building blocks ensures glare-free daylight in all regularly occupied areas. All the liner blocks are oriented in East-West direction with shorter facades facing the sun. The form of the building self shades the glazing such that direct sunlight is blocked at critical times of the day. The exposed facades and walls on the east and west directions have limited glazing.

The shading devices are designed such that the windows are completely shaded during the summer, which also contributes to reduction in cooling energy demand of the building. Energy efficiency is further enhanced by insulation of the walls and roof; and use of high performance window glazing to minimize thermal gain

Solar rooftop system at TERI SAS TERI SAS added yet another 'green' feature to its repertoire when a 48 kWp solar rooftop system was inaugurated on September 12, 2015 during the Deemed university's annual tech-fest REtopia. DrChandanMitra, Member of Parliament, Editor and Managing Director of The Pioneer, inaugurated the system by energizing one of the invertors. The solar rooftop system has a separate 5 kWp R&D plant meant specifically for the hands-on training of the students. This state-of-the-art grid-connected system comprises polycrystalline PV modules and SMA invertors. It is expected to generate about 1.5 million units of electricity over 25 years, offsetting 15% of the grid electricity. It would also result in mitigating around 1400 MT of CO2 emissions. The system has been set up under solar leasing model wherein the Deemed University did not have to invest anything upfront. As per the power purchase agreement signed with the Renewable Energy Supply Company (RESCO), the solar-tariff is, and will remain, substantially lower than the grid-tariff. The RESCO would also take care of the operation and maintenance of the system. However, the main motive for the Deemed University to opt for the solar rooftop system was to bolster its philosophy of practising what it preaches, besides having something that physically manifests the theory that is taught, thereby providing students an actual feel.

Water Management To reduce the water demand, buildings in the campus have been provided with low flow fixtures such as dual flush toilets, low flow taps and sensor taps that would result in 25% savings in water use. Further, the wastewater generated from the hostel building equivalent to 8 KL/day will be treated through efficient biological process using a combination of microorganisms and bio-media filter. The treatment system requires low area and energy. The treated water meets the prescribed standards for landscape irrigation. Rainwater run-off from roof and the site would be used for recharge of aquifer. This would enhance the sustainable yield in areas where over-development has depleted the aquifer.

Natural Ventilation The predominant wind direction is taken into account in designing the open space. The hot air from outside moves into the central court where it passes over the water body and fountain. The air thus gets humidified and becomes cooler. This makes the central atrium area always cooler than the surrounding exterior.

Cooling System The campus is equipped with three types of cooling systems, integrated to take advantage of different innovative technologies to achieve energy efficiency. They are discussed briefly as under.

Use of efficient double glazing window units helps significantly reduce the heat gained through window glazing in the summers and the heat lost in the winters without compromising on the day lighting integration and the levels of visual comfort.

The walls that are exposed to the harsh solar rays have a stone cladding which is fixed to the wall by channels. The air gap between the wall and the stone cladding by itself acts as an insulation layer. On the facades rock wool insulation is also provided in the wall. Energy efficiency is further proposed to be enhanced by insulation in the roof slab.

Earth air tunnel system It is used for free cooling / heating of the building for a major part of the year. This technology uses the heat sink property of earth to maintain comfortable temperatures inside the building. Supplementary systems have been used for extreme conditions (monsoon). In such a system energy savings of nearly 50% compared to conventional system can be achieved. At the campus, this system is used for providing comfort for the rooms in hostel block.

Variable refrigerant volume systems The VRV system is a modern air-conditioning system, similar to an efficient version of a split air conditioner. The VRV system is highly efficient under partial load conditions and therefore, has been used in areas with varying occupancies such as the office block, laboratories, administrative block and recreation & dining areas of the hostel block. It features customized control of individual zones. Depending on the cooling demands of the building, variable refrigerant volumes circulate through the chillers. The VRV system also eliminates the requirement of a plant room; piping & ducting for chilled water; and contributes to 15% energy savings as compared to a conventional air conditioning system.

Thermal Mass Storage Thermal mass storage is used in the classrooms. It involves storing energy when available and using it when required. In the proposed arrangement, cooling of the thermal mass is done during night (when ambient temperatures are lower). During daytime when ambient temperature is high, the thermal storage is used as sink for the fresh air requirement. Estimated energy savings of up to 40% can be achieved with this system. 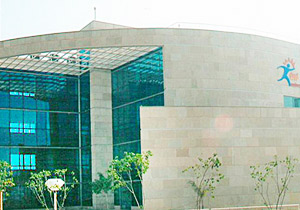 Artificial Lighting The campus has an efficient artificial lighting system designed for minimizing the energy consumption without compromising the visual comfort in the building. The system takes advantage of day lighting wherever available. Efficient lamps with high lumen output fixed with mirror optics reflectors and bat-wing louvers for glare free uniform illumination have been installed. All fixtures have energy saving electronic ballasts. With efficient designing the lighting loads have been reduced from 2W/m2 to 1 W/m2.