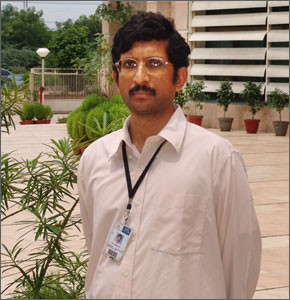 Professor and Dean(Academic)
• Department of Biotechnology

Dr. Ramakrishnan Sitaraman started his research career with a detailed study of a phase-variable restriction-modification systems in the rat pathogen, Mycoplasma pulmonis during his doctoral work at the University of Alabama at Birmingham, U.S.A.  Thereafter, he worked at the National Institutes of Health (NIH), U.S.A., where he contributed to the development strains of Bacillus anthracis deficient in either proteases or restriction enzymes.  The protease-deficient strain is now listed as an invention available for licensing from the NIH.  Subsequently, at Vanderbilt University, U.S.A., he investigated signaling events in cell lines induced by Helicobacter pylori phospholipases, and developed a novel assay to evaluate synergistic hemolysis.  His doctoral and post-doctoral work amount to a total research experience of 13 years before joining TERI university.

Dr. Ramakrishnan"s research interests are in the areas of microbial pathogenesis and genetics, gene regulation, restriction-modification systems and science education.  The Life Sciences Research Board (Defence Research and Development Organisation) and the Department of Biotechnology (Government of India) have funded his research.  In 2011, in recognition of his contributions to pedagogy and publications on science education in peer-reviewed international journals, he was invited as a Visiting Scientist by the Homi Bhabha Centre for Science Education, Mumbai, a national institute of the Tata Institute of Fundamental Research. Besides his research and teaching, he has rendered professional service as an ad hoc reviewer for international journals and for the DST.